Be My Princess for GREE Christmas Event Released Yesterday

“Yesterday” being a joke

And I’m tired already. It’s the first event in which I missed the “first day” which, hopefully, doesn’t ruin my chances of completing all three available routes before the end of the event. Unfortunately, my enthusiasm to play still hasn’t come back since the last events, and the fact that the Furniture Hunting Event isn’t even over yet makes me even less enthusiastic about playing.

When it comes to most games, especially ones that give you special limited items, I want in on the action! So much so that it then becomes a chore. But at least by participating I’m able to get all the items, right? NOPE. Not with this game. I still haven’t started the Prologue, so I don’t have access to the Event My Page, but, as far as I can tell, this event follows the same idea as the previous Our Secret Vacation Event with Prince Glenn, Prince Joshua, and Prince Edward: Complete all Normal and Happy Ends and you will receive a special item!

These events only last long enough to complete ONE end and, possibly, a partial replay of a route. If it was just an avatar background, it wouldn’t bother me so much. I’d be disappointed that I wouldn’t be able to obtain it, yes… but, at the same time, the only way I’d be able to obtain it would be to throw my money at Voltage and buy Love Passes to be able to finish both endings before the end of the event. 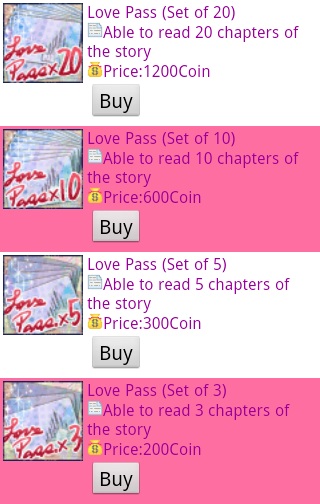 Fine,  it’s the price I pay for not willing to spend money on it. But oh, no. That’s not what happened in the last event. THIS is what happened: 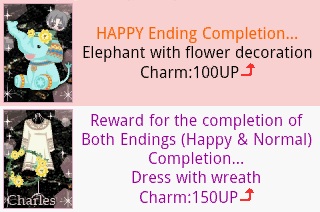 To top it off, these events are coming out one after another after another. I haven’t even been able to complete the first route in the main story because I’m too busy doing the events and then resting after they’re finished. Quite frankly, I pretty much don’t want to touch the app after the end of an event because I’d have spent so much time on it already that I just need a break from it, except for the occasional greets and Daily Gacha. And I see a rough future for me when the time comes that I’ll just be done with the whole thing because I’m so dedicated when it comes to item collecting in games. That’s why it was so hard for me to quit Gaia Online and Nostale and why I become nervous when I want to start playing a game only to find out it’s an MMORPG.

This game is already getting close to the border of fun/entertaining and being a chore. Really, the only thing keeping me playing is the stories and the characters because, I confess, I always have a good laugh. It’s the non-story related things that I just can’t stand.

Now I’m just hoping the event isn’t like the previous Our Secret Vacation Event and dreading the day Pirates in Love for GREE comes over.

Update: There is no completion item for both ends listed, so hopefully it stays that way! That gets a lot off my chest about it. However,

ARE YOU KIDDING ME RIGHT NOW?