“From today, we are more than childhood friends.”

You became an adult without forgetting your first love.

You meet your first love again in a fateful reunion, but you are quickly dumped.

Five childhood friends, with whom you grew up with in the same apartment complex, cheer you up.

“Forget about that guy already.”

That night, he goes beyond the boundary line of a childhood friend!?

He should have been “outside the target of love” for a long time, though overnight, I see him more suitable (カッコ)!?

To the smiling face that I should have seen all the time in a neighbor, for the first time in front of him, my heart keeps pounding!

Am I the only one who gets embarrassed when we’re together?

By the choices you make, accelerate your love and reach your happy ending.

This seems to be the result of a few of the previous surveys in Voltage’s games, one of which was released in the English games. That one asked questions on what type of romance we would like to see next where most of the options centered around “first love” and “first adult experiences”. A lot of firsts, basically. Other surveys, which were released only in the Japanese games, asked about what kind of butler love story we’d like to see, and one asked which of the guys (pictured below) in the images we liked most. Of course, me and my need for older games to be ported hoped that the butler mention meant that we might be seeing 真夜中のジュリエット get ported. But that’s another story.

Well, at least I’m sure that this game’s release was the result of the first survey, though I’m sure they would have released it despite the results considering how quickly it was announced since the release of the English survey, which was back in December. The one with the above image was in January. Just how quickly do they make these games?!

though, of course, they’re pretty rough. I will admit, though, that it was one of my least favorite surveys. I really didn’t like the choices they gave, but whatever. I think the other Japanese surveys for this game went into more detail, but I completely missed them .

The obtainable cast include (character descriptions from Riichany):

If past releases are any indication, only the first one or two characters will be available upon release, which are Ayato and Ichiya.

I’m a sucker for childhood friend type stories, and the idea of this one (sans the “learning adult love” thing) really jumps out at me, so I’ll definitely be looking forward to it. Considering the survey choices, though, I’m hoping that it’s not too filled with fanservice or anything like that to the point that the story and writing will suffer from it. And by that I mean that it ends up lacking depth, the romance is too fast, or that it’s filled with drama just to fill in space or overused tropes. Fingers crossed!

It is set to be released on or around March 4th. 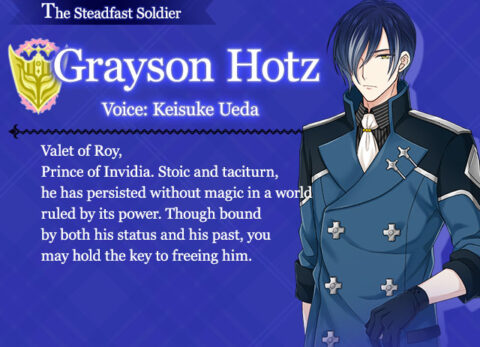