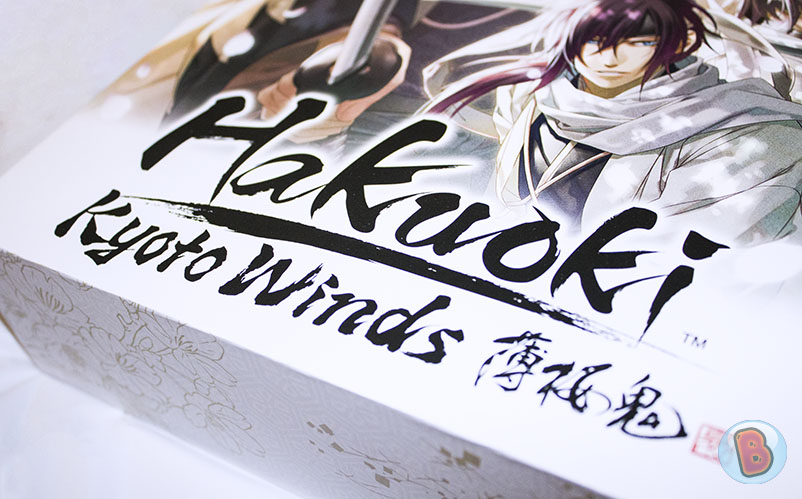 Last Thursday, my copy of Hakuoki: Kyoto Winds Limited Edition arrived in the mail! I have unfortunately not had the proper opportunity to take a look at the set until now, but here it is!

I must confess that when I first pre-ordered the set, I had no idea how big it was going to be. When it was put up for pre-order on the official site, I didn’t even bother with reading the description before I made the purchase. I’ll buy any English localization of an otome game if it’s released as some kind of Special/Limited Edition! This box set measures 13.5X9.5X2.6 inches. For comparison’s sake, here’s how the size of it compares to the previous Hakuoki Limited Edition releases: My Hakuoki English “Limited Edition Collection” is complete (for now)!

Now here it is compared to my Vita: 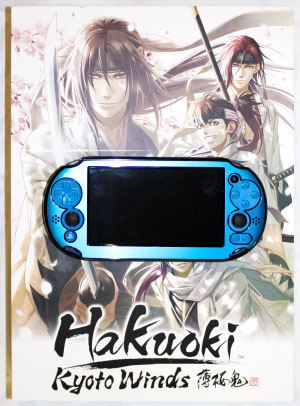 This is huge. I honestly have no idea where to put it! For now it’s just hanging out on top of my dresser, but I need to find a home for it somewhere else! Preferably somewhere safe where it won’t collect dust or accidentally fall.

The box itself if gorgeous and sturdy. Opening the box is a bit of a hassle when it comes to opening boxes. It takes longer than it should because of how well fit the lid of the box is, but I’m not complaining! Getting the lid off also greets you with that New Box Scent and chibis of the guys on all sides!

My favorite side, of course.

And here is the inside! 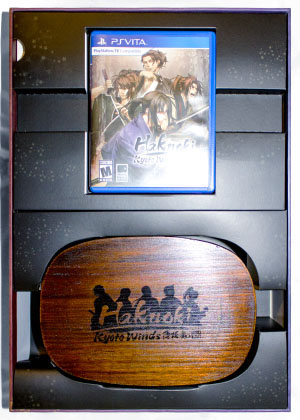 Unlike the previous LE sets, everything included is actually layered inside the box. Removing the Vita game box and cardboard underneath it will reveal the Melodies from Kyoto Official Soundtrack. 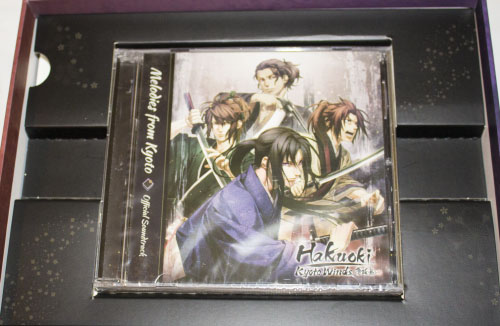 And underneath that is the furoshiki. 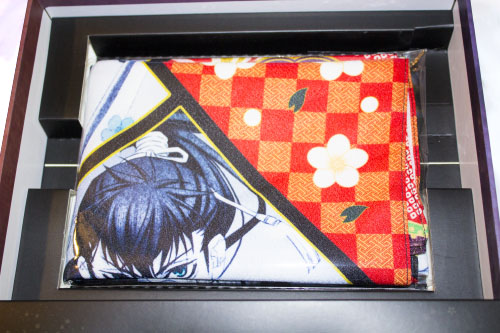 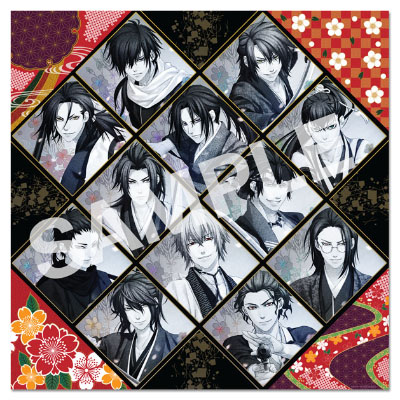 And underneath that is the Record of Service Art Book! 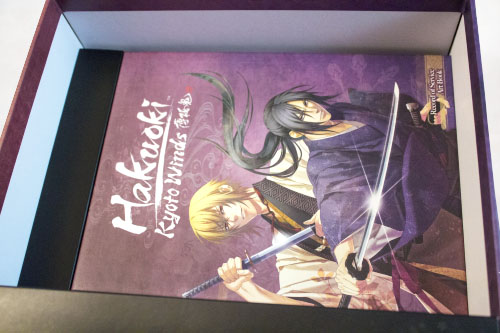 Overall, I’m blown away. This box set is much more than I thought it would be. It practically screams with how much love and care went into this, from the design to the goodies. If you are a Hakuoki fan, I absolutely recommend getting this set!

The game itself has a much smoother and sleeker design compared to the PSP/3DS versions. The text is much easier to read, and I have to say that part of it is because of the new font style they went with, not just the larger screen size. I did hit a textual/grammer(?) mistake in the first scene, which is unfortunate. I seriously hope there aren’t too many later on in the game, barks of laughter aside. The new soundtrack is very pleasing, I could listen to it on repeat~ And there’s characters blinking! And mouth movement when they speak! This is a lovely feature which was first implemented in the PS3 port of the game, along with a Live2D-sort of feel that also included breathing, body movement, and hair movement. Unfortunately, the PS3’s version was rather awkward. I had to turn off some of them when playing because it was either distracting or just… really, really awkward to look at. Kyoto Winds only implements the blinking and mouth movement, which makes it less awkward looking, so I was very pleased to see that. And there’s even particle and camera motion effects! Comparing all of this back to the PSP version, I honestly want to cry at how far it’s come!

I must admit, though, I haven’t gotten farther than the initial appearance of Saitou and Souji. I was hoping to play it seriously as soon as I was able to, but as I found out later on, this isn’t the full game. Well, it is. It’s “Part 1”. I’m rather disappointed that this fact wasn’t pointed out on the store page or even advertised as being a “Part 1” of the story. I’m not fond of cliffhangers that will make me wait for a very long time (thank you, Netflix), so hearing this has made me put a hold on seriously playing it. I’ll admit, it is partially my fault for not looking into it more. I was aware that there was a game following this one in Japan, but I wasn’t aware that they were, in a way, segmented. I bought Kyoto Winds with the belief that I was getting the full game with completed story. I’m glad I came across a thread on Twitter saying it wasn’t so. I don’t know what I would have done if I started the game only to be abruptly stopped and told “To be continued” even for routes I’ve already played before.

I’m also a bit disappointed that the Zuisouroku fandisk isn’t included here. I’m not too upset, though, since I can already play that with the PS3 port. It just would have been more convenient to have it on the Vita as well without having to use the Remote Play function. I even nearly bought Stories of the Shinsengumi again on the PS Store just to be able to play the fandisk portion on my Vita… until I realized the purchase would still only be for the PS3.

As far as I know, Iffy has not announced a release for Part 2. Even so, I excitedly wait for the release of Part 2 (Hana no Shou) in English, and hopefully another gorgeous LE box set!

Voltage Inc. Announces “Thief X will be Reborn!!” This October

[Be My Princess: PARTY] Anniversary Cards