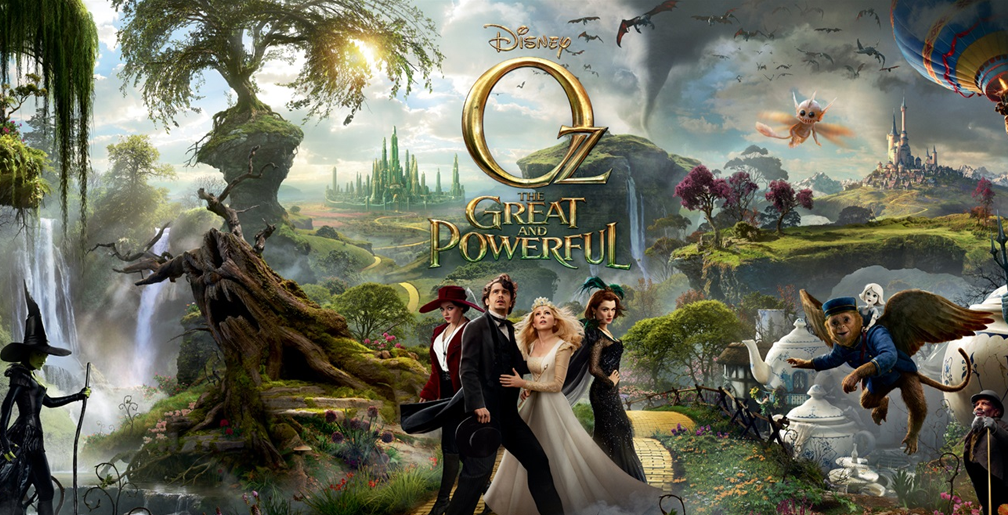 One of the most anticipated films of 2013 is finally here. Was the anticipation for it really worth it though? Disney’s Oz the Great and Powerful is a prequel to the 1939 film, now a cult classic. With actors James Franco, Mila Kunis, Rachel Weisz, Michelle Williams and Zach Braff attached to it, Oz has much of said anticipation to please over the weekend.

The premise of the film is nostalgic. A black and white introduction of Oscar (Oz) in Kansas before he’s swept away by a tornado into the land of Oz. About 15 minutes in and I’m already laughing at the comical remarks and tricks of Professor Oz and his assistant Frank (Zach Braff). As Oscar arrives in Oz, the screen extends and the CGI color pours in. First up is the witch Theodora (Mila Kunis), who welcomes Oz and informs him of the prophecy of a great wizard coming to save the kingdom and its people. At this time, I’m still not used to seeing Mila Kunis in a big fairytale film. Go back to comedy! Joking! I love her. Plenty of conversations later and an encounter with a flying baboon (they look pretty cool), Theodora and Oz share a dance and then a kiss. Really? That fast?? Was she really that desperate to find a man? !!!

Oz later meets Evanora (Rachel Weisz), Theodora’s sister. There’s your antagonist; of course you know right away that she’s a wicked witch. That woman doesn’t age, does she? My gosh this is sounding like a summary of the film! Important points:

Likeable characters? I’ll have to say they all were. The actors did a great job with the roles they were given. I wouldn’t say that Oz wasn’t likeable, because he was in a sort of way. We are supposed to follow and care about this male protagonist through his adventure into a new and beautiful, yet crumbling world. Instead, we get a jerk who likes to toy around with women using his, “this music box belonged to my grandmother,” trick. And by the time he starts to redeem himself as a hero who actually cares about the people of Oz, it’s a bit too late. I’m left not caring much of his fate, though we all know that it won’t be a tragic one. Rachel Weisz on the other hand plays a great wicked witch whose lust for power ends in her downfall. I did quite enjoy Theodora’s transformation from a good witch into The Wicked Witch of the West. Yes, Evanora might have given her an apple to turn her to the dark side of the sith (magic), but it was James Franco’s near-intolerable Oz’s fault for her wicked fate. Also, Mila Kunis did a great job as a cackling female Hulk after all!

The CGI also gets a big thumbs up. A whole new Oz was re-imagined and condensed into colorful plants and creatures and foggy atmosphere. I was disappointed though, by the lack of the Dark Forest. Other than crows yelling, “You’re gonna die!” and some weird, yet dangerous plants, we didn’t get to explore more of it. The transition from black and white to full-on color felt just right and it wasn’t out of place (many expected it with the old classic in mind). Again, the CGI is great! I saw it in 3D but there was nothing special about it, so don’t even bother to waste the extra bucks for the glasses and constant blurs. To compare it with Tim Burton‘s Alice in Wonderland, I’d say this one was a bit more polished with the CG but the land of Oz was not explored as well as Wonderland.

Should you go watch it? Definitely, if you’re a sucker for CG and fairytales re-imagined into glorified live-action sequences. I enjoyed it, but not as much as I would have liked to. But the reason was because I had so many high expectations of it since I first saw the trailer last year. Seeing as Disney is already talking about a sequel to this prequel, we might just get to see a lot more of Oz in the coming years.

The Interview Is Coming To Theaters, Star Trek 3 Gets Release Date