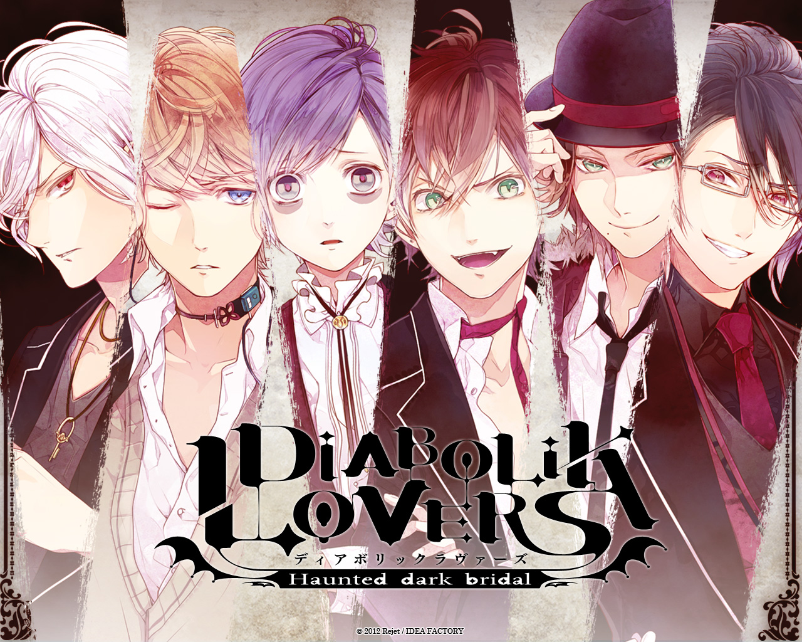 Update 6/19/20: The original panel stream has since been deleted on Twitch.tv, so I’ve replaced the link with the video on YouTube.

Video game publisher Aksys Games, well known in the otome gaming community as the top company to localize console otome games in the West, had a panel yesterday at MomoCon titled “Otome: Hot Men, Hot Abs, Hot Mysteries” where they talked about what otome games are and how they go about with the localization process.

In a segment where they talked how they chose their games, they explained that either A) companies approached them with a game or B) Aksys would see something that caught their eye. They then went off to explain something that many otome game fans have been wondering, specifically those who have been wanting games like Black Wolves Saga and Diabolik Lovers to see a release in the English-speaking market.

Black Wolves Saga and Diabolik Lovers, otome games by Rejet and developed/published by Otomate, were both released in 2012 in Japan. Black Wolves Saga, the first of the two releases, had two games in the series with the first carrying the title “-Bloody Nightmare-” released on PC and the later second with the title “-Last Hope-” released on the PS Vita. Diabolik Lovers was first released as a drama CD series aimed towards masochists and was later released as its own game and story on the PSP.

While Diabolik Lovers is the most popular of the two, both series gained a following due to their twisted and disturbing story-lines. As Diabolik Lovers made use of the dummy-head mic technique for its voice actors, it gained even more fans. Diabolik Lovers eventually spawned more drama CDs, game sequels with more characters, manga adaptations, an anime adaptation, and whole line of merchandise.

So with all the popularity that both titles have received, especially with Diabolik Lovers, the question remains: Why hasn’t a localization company picked up either game for the West?

There are a few answers to this, including one where Rejet just doesn’t want anything to do with the West for the fear of piracy. And then there’s the reason Aksys gave during their otome game panel at MomoCon yesterday, one that many fans have been all too aware of despite hoping against hope.

This is important, because there have so far only been five companies that have localized PC and console otome games, and they are

From the above list, we can already tell that the only companies that would be willing to take on Black Wolves Saga or Diabolik Lovers are Aksys or Idea Factory International (IFI) solely based on the kind of games they’ve done in the past. Seeing as XSEED is new to releasing otome games, it’s hard to tell how far they’ll go with it.

Unfortunately, it seems that those two games are ones that Aksys will not be able to localize for the West.

…It’s important to know if there’s some weird twist somewhere in the end that ESRB might be like, “…Uh, no, that’s, that’s not-, we can’t-, we can’t bring that over to the United States. And there’s several games, there’s a lot of games where you’re like, “Hm, well, that ended really, really weird.” Lots of, like, stuff you just don’t want to read.

There’s a few things where we were really hyped on a game until we hit The Point, as it were, and it’s like, “Mmm-Nope. This is NOT gonna work.”

This is something that many fans have come to agree on when the question of a localization comes up. Both Black Wolves Saga and Diabolik Lovers have twisted and disturbing content, including torture, child abuse, rape, incest, physical and mental abuse, and… well, you get the idea. While the stories themselves are interesting on a story level, the fact that they’re marketed as otome games is what many fans think is the problem. Heck, when the Diabolik Lovers anime was released, people came in droves to blast the series for glorifying abuse, which is not what the series was doing (at the time). Both games were made to be uncomfortable and disturbing regardless of the romance that was involved. At no point are any of the “tragic backstories” supposed to make you condone what the characters do. People taking these tragic and horrifying stories and belittling them as “abuse-glorifying dating sims” is a very real-world response by people who only ever want unproblematic content to exist. They’d rather have the Disney version of fairy tales than to hear of the originals where suicide, rape, and gruesome murder/mutilation were prominent in the stories.

I mean, either the ESRB or the FBI are going to be knocking at our door asking for answers.

As much as Mike said the above as a joke, it’s made clear that how disturbing the content is alone could cause significant problems not just to the games themselves, but to Aksys as well should they choose to localize it.

Before moving onto the next topic of the panel, Mike gives a final comment on the issue.

…Keep in mind also with otome, because it DOES go into the dark side quite a bit. You guys are probably familiar with other series’ that, while we might like them, there might be a market for them, it goes beyond just ESRB and the gaming industry at that point. So, it’s something we do have to tread lightly. That also influences some of the games we decide to do.

Though it’s not a direct jab at Black Wolves Saga or Diabolik Lovers, the meaning is clear. At this point, it can be considered as being the “final nail on the coffin” as far as Aksys goes. These two games are not the only otome games with uncomfortable or disturbing storylines (I’m looking at you, MoshiKami), but they are two of the most popular ones. This makes it easy to see that these two were most likely on Bailey’s, Karen’s, and Mike’s minds when speaking on the topic.

While Idea Factory International is a branch of the main company that published both games in Japan, we could safely assume right now that they’d only focus on PC releases. While that’s a downer for Diabolik Lovers fans, that still gives a bit of hope for a possible release of Black Wolves Saga -Bloody Nightmare- in the future. Maybe.

Or hey, maybe XSEED will step in and do both as digital-only releases as they did with London Detective Mysteria. I’m sure any kind of physical release with Limited Run Games would sell out quickly, too, so. Just saying.

Click here to watch the full Aksys panel stream. At 12:49 is where the sections “How Do We Choose Our Games?” begins, and starting at 14:50 is where the above quoted statements are made.