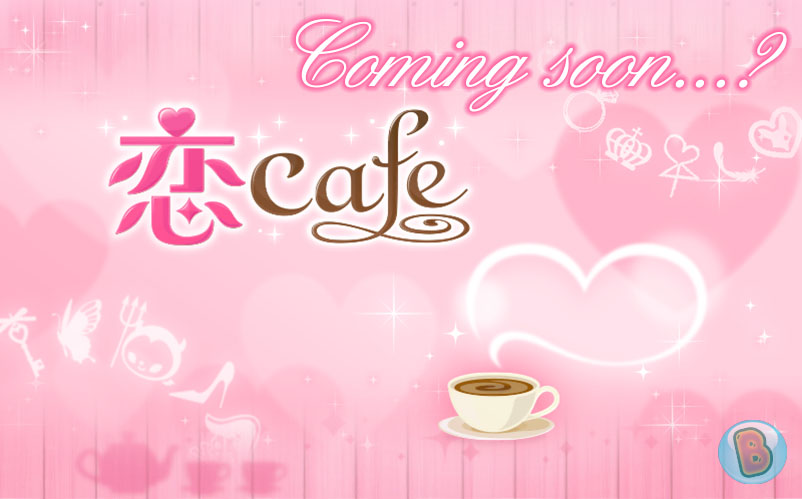 Update 1/16/14: Voltage Inc. has announced the released of Sweet Cafe!

Update 12/25/14: I’ve been told that the English title of the app will be Sweet Cafe. Also, nine stories will be available upon release for free as a thank you from Voltage Inc. for our continued support. If I am correct, the selected stories will be determined by the result of the Ikemen Campaign going on on the Facebook page (the Mystery Gift). Prologues for all games will be made available for free, except for Pirates in Love, Seduced in the Sleepless City, A Knight’s Devotion, Kiss of Revenge, Office Secrets, and Serendipity Next Door (which have all been “cancelled”). So far, it looks like 75 stories are planned for release. Ichigo, Takuto, and Yamato will be available to be set as TOP page characters with more characters planned for release. The ability to LINK games will also be made available, and as I’m told from a friend who uses the Japanese version of the app, previous purchases will allow you to get “Voltage Tickets” without having to repurchase them. We will also be getting the Coin Drop mini-game, but it so far doesn’t look like we’ll be getting Illustrations outside of the Coin Drop game (don’t hold me to that, though).  It feels like the time of the release announcement is getting closer!

On October 1st, Voltage Inc. released a new Survey in the My Forged Wedding News Page (that I completely missed until someone told me whoops) suggesting that we will be getting the Koi Cafe app in English. The survey has also appeared in Kissed by the Baddest Bidder, though it doesn’t seem to be in any of the other games (do correct me if I am wrong).

Unlike Voltage Inc.’s other games, Koi Cafe isn’t a game itself. Instead, it is a library of special stories and illustrations from Voltage Inc.’s already released games and Prologues of upcoming games, as well as a recently released Coin Drop game in the Japanese version that will allow you to get other special stories and illustrations that can only be obtained through playing the game.

With Koi Cafe, you will be able to link your existing Voltage Inc. games to it. Doing so will allow you to receive free Latte Tickets when you make a purchase in any of your linked games. Latte Tickets are used to buy the special stories and illustrations available in the Koi Cafe library. You can also buy Latte Tickets directly from Koi Cafe. Riichany has made a nice little tutorial on how Koi Cafe works (Go thank her!). She’s also made one for the Coin Drop game, though it’s still unclear if we will be getting it as well.

Funny thing, my source told me about the possibility of getting it in English a few days before the 1st… and I didn’t see the survey until just a while ago when someone messaged me about it whoops. I have to admit, though, with the sneak preview of the upcoming English release of 恋人は公安刑事 being released with My Sweet Bodyguard’s most recent Sub Story, I’m not at all surprised to know that they might be giving us an English version of Koi Cafe. Having the app itself would make it much easier for Voltage Inc. to release previews like that since they’re already doing it in the Japanese version in which they release the Prologues of upcoming games available for free through 恋cafe. But, the fact that Voltage Inc. released a survey solely for the purpose of asking about a potential English name means that we may very well be getting it in English. I mean, come on, the last time Voltage Inc. pulled this little stunt was back when they released a survey for potential English names for what we now know as My Forged Wedding: PARTY. There hasn’t been any official announcement yet, but I’m definitely very hopeful about it!

And… MORE PIRATES IN LOVE, BE MY PRINCESS, AND MY FORGED WEDDING STORIES! Why WOULDN’T I be happy?! At least, I hope we get the stories of the games that are on the “undecided status” list (don’t quote me on this about BMP, I’m only lumping it in because there hasn’t been a sign of an update at all). I would be ridiculously happy to get them! I need more Pirates in Love scattered in between everything in my backlog! And I know I won’t be the only one happy to get more stories from games on that list. So far, only 恋に落ちた海賊王 (Eng. title: Pirates in Love), 復讐のキスをあなたに (Eng. title: Kiss of Revenge), and 眠らぬ街のシンデレラ (Eng. title: Seduced in the Sleepless City) are the only ones on that list that have stories in the Japanese version. I really hope their being on the list doesn’t affect the possibility of getting them in English!

I’ll keep checking in, so I’ll update if I get anything else. I have my hopes up! Don’t ruin this for me, Voltage!

(Updated) Kunihiko Now Available with Campaign and Gacha in My Forged Wedding: PARTY