[Be My Princess: PARTY] New Event Coming Soon: Tonight Is Our Night

Update: For those looking for information about this event or a guide, I made a new post: [Be My Princess: PARTY] Tonight Is Our Night Event Info. 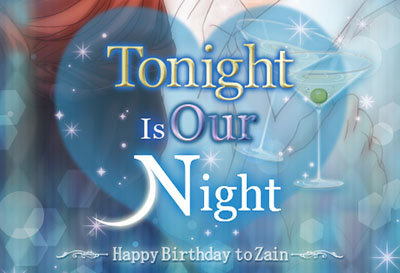 If there was any indication that the current Secret Royal Night event is being cut in half in favor of releasing Zen’s Birthday Event, well… ta-da?

Zen’s birthday is just around the corner, and so is his birthday event! If I am correct, and don’t quote me on this, this is an event that hasn’t been released in the Japanese version of Be My Princess for GREE, meaning all three stories will be brand new. It should be noted, though, that the CG’s for this event are not new for the most part. Instead, the CG’s were all previously used either in the app version or from previous GREE events with only minor changes such as background changes (as seems to be the case with all new stories with CG’s).

I still don’t know much, but I wouldn’t put it past Voltage Inc. to begin the event very soon after the current event ends, especially since Voltage has made it a point to split the current event in half. I’ll update again if I get more before it starts, but no guarantees. I will post the guide in the Voltage Inc. Guides page under the Be My Princess: PARTY section when I can and will leave it there until I can get the Event Info post up, so be on the lookout for it!